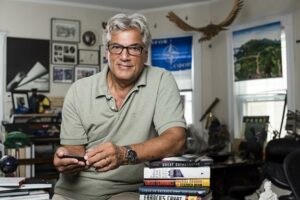 At Tufts, I was initially a lecturer in the Department of Political Science, first in 1978, and then returned to the Department for a year in 1984. In 1985-86, I created the Experimental College’s Symposia Project (SP), and was named Special Advisor for University Intellectual Life.

The SP soon evolved into what became the core program of the Institute, Education for Public Inquiry and International Citizenship (EPIIC), annually distinct thematic efforts comprised of a colloquium, symposium, immersive education, and professional workshops.

I retired from Tufts in 2016, after thirty years as the Founding Director of the Institute.

Upon becoming Emeritus, I became founding President of a nonprofit higher education consultancy, The Trebuchet. Resonating the mantra I originally developed for the Institute, Thinking Beyond Boundaries / Acting Across Borders, The Trebuchet’s motto isBreaking Down Barriers / Building Bridges.

The Trebuchet’s primary activities are the creation of non-partisan policy fora confronting global issues; and the development and deployment of a highly-interactive, cross-disciplinary network, Convisero, integrating experts and alumni of my fifty years of programming and mentoring, and new allies.

For two years, I was a Senior Fellow of the Carr Center for Human Rights Policy of the Kennedy School at Harvard University (2017-19). My ongoing concern is with the impact of corruption on human rights.

Having missed mentoring undergraduates, I became the Inaugural Fellows Mentor for the Albright Institute at Wellesley College in 2018, and an advisor for Harvard’s undergraduate International Relations Council, where I have embedded the Oslo Scholars program I created at Tufts with the Human Rights Foundation.

I am a Senior Fellow at the Liechtenstein Institute for Strategic Development and at The Raoul Wallenberg Centre for Human Rights; and a Strategic Advisor for the Human Rights Foundation, RefugePoint, and Music for Life International.

I serve on the Academic Advisory Board of the American Friends of Combatants for Peace; on the Advisory Boards of VII Photography Foundation, Embodying Peace; the Development Advisory Board, Council for European Studies; as a contributor to CES EuropeNow.