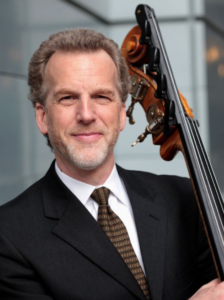 A native of Philadelphia, Peter Lloyd is agraduate of the Curtis Institute of Music and the Settlement Music School, having studied with Roger Scott and Eligio Rossi. Upon graduation from Curtis, he immediately joined the Philadelphia Orchestra, remaining there for more than eight seasons before accepting the position of principal bass of the Minnesota Orchestra, which he held from 1986 to 2007.

Having dedicated much of his career to the chamber music repertoire, Peter has performed with the Guarneri String Quartet, Jamie Laredo at The 92nd Street Y and for many years been a regular participant at the Marlboro School of Music, Chamber Music Society of Lincoln Center, Orpheus Chamber Orchestra, Chamber Music Northwest, Music From Angel Fire, Bravo! Vail Valley Music Festival, Chicago Chamber Musicians, Brooklyn Chamber Music Society, BargeMusic in New York City and The Brandenburg Ensemble.

In addition to his concert schedule, Peter is a regular visitor to many of the leading music schools in the United States, giving master classes, lectures and recitals at the Curtis Institute, The Juilliard School, Tanglewood Music Festival, Manhattan School of Music, Mannes School, Indiana University, Peabody Conservatory, Chautauqua Institute, Youth Orchestra of the Americas and many others. He serves as an annual coach at the New York String Orchestra Seminar held at Carnegie Hall under the direction of Jamie Laredo, is a regular visiting teacher at the New World Symphony and has been invited to the Guangzhou International Music Academy under the direction of Charles Dutoit and the Pacific Music Festival in Sapporo, Japan.

Peter has served on the faculties of Northwestern and Indiana University and is presently a member of the faculty at The Colburn School in Los Angeles.

He performs on a world-renowned bass violin made by Daniel Hachez, graciously provided by Robertson Violins of Albuquerque, New Mexico.